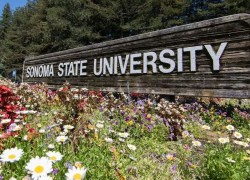 The 20th edition of the Cultural Youth Education Camp, sponsored by the Luso-American Education Foundation, in partnership with the Government of the Azores, begins today at Sonoma State University, California.

Sandra Melo, a teacher from the Tomás de Borba Primary and Secondary School in Angra do Heroísmo, Terceira, will lead the camp. She will introduce participants to the traditional and contemporary culture of the Azores, through various workshops.

The initiative, which runs from June 19 to 23, aims to promoting the integration of young people into academic life by exposing them to university life while expanding their knowledge of Portuguese cultural heritage and values.

The Cultural Youth Education Camp is aimed at young people between the ages of 12 and 18. Participants will be provided with a five-day experience in the university camp, including visits to various departments and cultural activities ranging from music to architecture, Portuguese art, dance, history, language and culture.

Founded in 1963, the Luso-American Education Foundation has the mission to promote the Portuguese language and culture in the USA, including granting scholarships, supporting Portuguese courses in American universities, and sponsoring the Portuguese Language annual conference.