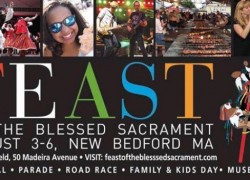 The 103rd Annual Feast of the Blessed Sacrament is taking place this week, August 3-6. The festival is is all about music, history, food, fun and family.

Founded in 1915, by the Portuguese immigrant community of Madeira descent, the event has become one of the largest Portuguese feasts in the United States and the largest ethnic festival in New England.

Over 100,000 people are expected to gather at the heart of New Bedford’s north end — at the intersection of Earle Street and Acushnet Avenue – to celebrate Portuguese American culture.

The celebration starts on Thursday with the assembly of the Festeiros (Feast Committee Members) at the intersection of Earle Street and Acushnet Avenue.

The grand parade, the largest parade in New Bedford, is scheduled for Sunday, starting at 2 pm. It will include over 40 different organizations marching the one mile route from Brooklawn Park to the Feast grounds at Madeira Field.

Live entertainment on three stages includes cabaret style music and Fado singers in the quiet atmosphere of the Courtyard Café at the Museum of Madeiran Heritage.

Entertainment and admission are free, including a visit to the Museum of Madeiran Heritage which will be open to the public at no charge throughout the festival.

The Museum, the only one of its kind, is home to a collection of photographs and various artifacts that illustrate the Madeiran immigration experience in the Unites States.

The Portuguese connection with New Bedford developed from early eighteenth-century whaling. In the 1860s, they comprised up to 60% of whaling crews. From 1870 to 1924, residents of Madeira and mainland Portugal joined Azoreans in looking for opportunities in emerging industries, particularly the textile mills, of New Bedford.

For more information visit Feast of the Blessed Sacrament