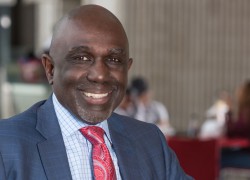 University of Massachusetts Dartmouth Chancellor, Robert E. Johnson, visited this week the Catholic University and the Camões Institute in Lisbon, to strengthen partnerships with the Portuguese-American community, Portugal and the Lusophone world.

As part of the initiative, Chancellor Johnson will move the Center for Portuguese Studies and Culture, the university’s primary conduit to the Portuguese-American community, from the College of Arts and Sciences to the Office of the Chancellor. The governance structure of the Center, with a faculty-led executive board and community-based advisory board, will continue.

Chancellor Johnson visited the Catholic University of Portugal as well as the Camões Institute, a Lisbon-based national center that promotes international cooperation and education. The Institute has been a major supporter of UMass Dartmouth’s Portuguese-related education, research, and outreach programs.

“My goal is for our university to fully embrace its historic connection to Portugal, the Azores, and the rest of the Portuguese diaspora in new and innovative ways,’’ Chancellor Johnson said.

“To accomplish that goal, we need to coordinate and align the many critical inter-disciplinary initiatives connected to the Center. I believe there is great potential for new innovative partnerships and outreach both close to home and abroad.”

The university is home to the nationally renowned Ferreira Mendes Portuguese-American Archives, Department of Portuguese, Center for Portuguese Studies and Culture, and the Tagus Press, the latter of which publishes Portuguese literary works.

The university has also established multiple academic and economic development partnerships, including the School for Marine Science and Technology has formed a doctoral education partnership with Brazil’s University of São Paulo Institute of Oceanography; The College of Nursing partners with the University of the Azores on the “Bridging the Atlantic” community nursing student exchange program; The Charlton College of Business and Center for Innovation and Entrepreneurship bring students to a “Startup Weekend” entrepreneurship forum at the Nonagon Science and Technology Park in the Azores; and The Center for Innovation and Entrepreneurship is advising the Azores business and government community on the development of a technology incubator.