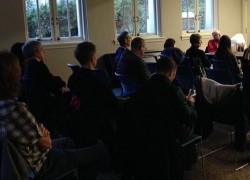 A group of Portuguese-American writers will present a public reading on April 23, at 6pm, at the Portuguese Consulate General, 3298 Washington Street, in San Francisco, California.

Organized by the Kale Soup to the Soul(KSFS) initiative, readers include Frank Gaspar, Anthony Barcellos, Darrell Kastin, Scott Laughlin, and Millicent Borges Accardi. The authors will read from their own work and will speak of their writing experiences and Portuguese American heritage.

Established in 2012, Kale Soup to the Soul is a reading series bringing Portuguese-American authors and their work to areas with large Portuguese immigrant populations in the United States.

Scott Laughlin (San Francisco, California) teaches English at San Francisco University High School and is Associate Director of DISQUIET: The Dzanc Book Literary Program in Lisbon, Portugal. He studied at Boston University and New York University, and is currently enrolled in the MFA Program at Converse College. He has been published in the SF Bay Guardian, Post Road, ZYZZYVA.

Millicent Borges Accardi (Topanga, California) is the author of three poetry books: Injuring Eternity, Woman on a Shaky Bridge, and Only More So has received fellowships from the NEA, CantoMundo, California Arts Council and Fundação Luso-Americana (FLAD).

Darell Kastin (Sacramento, California),  his books include the novel The Undiscovered Island, short story collection, The Conjurer & Other Azorean Tales, with two new novels: A Tale of the Azorean Nights, and Inês de Castro: Queen after Death forthcoming. He is also a musician and composer.

Anthony Barcellos (Porterville, California) grew up speaking Portuguese on his grandfather’s dairy farm in Porterville, and is the author of the acclaimed novel Land of Milk and Money (Tagus Press). He is a math professor at American River College in Sacramento.
The event co-sponsored by the Luso-American Development Foundation (FLAD), is free and open to the public. Refreshments will be served. Space is limited. For reservations contact  diana.reis@sfrancisco.dgaccp.pt or call (415) 346-3400.