Community: Screening of ‘The Gilded Cage’ a film by Ruben Alves – UMass Lowell 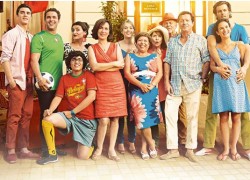 The Department of World Languages and Cultures and the Saab-Pedroso Center for Portuguese Culture & Research, UMass Lowell present the screening of ‘The Gilded Cage’ (La Cage Dorée). The event takes place on March 24 at 6:00pm, at the University of Massachusetts Lowell, in the O’Leary 222, (South Campus).

With actors Joaquim de Almeida and Rita Blanco the film is based on the lives of a Portuguese immigrant family in France. The story line is about a working-class Portuguese couple living in Paris with dreams to returning to Portugal. An unexpected inheritance would have made it possible for the Ribeiros to resettle in their homeland, but the family is caught into the immigrant dilemma of having to choose between their homeland and their adoptive country.

‘The Gilded Cage’ ( 2013) 90 minutes, France/Portugal, Pathé. In French and Portuguese with English subtitles.