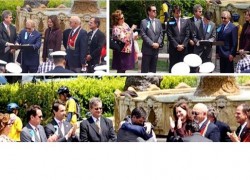 A delegation from the Portuguese town of Cascais, mainland Portugal, has been visiting Sausalito, California, to further the sister city relationship between the two cities.  The delegation is being hosted by Sausalito’s Mayor Herb Weiner.

The members of the Portuguese delegation include Alexandre Faria, a Cascais Municipal Council member with direct responsibility for Cascais’ international programs, and Henrique Velez, Mr. Faria’s assistant. Maria João Ávíla, a member of the Portuguese Parliament, also visited Sausalito for the occasion.

In Sausalito, from May 4 to May 8, the Portuguese delegation participated in the Espírito Santo Festa, first joining the procession from the Hall to St. Mary’s Star of the Sea Church for mass, then to Plaza Viña del Mar for the signing ceremony sister city protocol and back to the Hall for the traditional sopas lunch.  The events were followed by an evening Gala Banquet at the Sausalito Portuguese Hall, celebrating the Hall’s 125th anniversary.

Sausalito (population 7,061) is shoreline San Francisco bay area town known as one of Californa’s prime tourism destinations. The town is home to commercial fishermen and historic ship yards and an attraction for wealthy yachting enthusiasts.  Besides Cascais, Sausalito is sister city with Viña del Mar (Chile) and Sakaide, Kawaga (Japan).