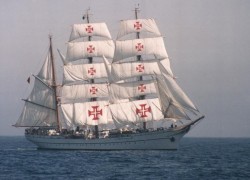 In Philadelphia, Sagres participated in the Philadelphia Camden (June 25-28) ‘Tall Ships Challenge 2015’, at the Delaware River waterfront international sea festival, the largest sailing event in the United States this year.

Over the 4th of July weekend, through Tuesday July 7th, Sagres will sail to Greenport Village Harbor, New York, to participate in the Greenport ‘Tall Ships Challenge 2015’ a four-day waterfront festival.

On July 10, Sagres will arrive in Boston, after a stop in New Bedford on July 8-9, where it will be hosted by the New Bedford Whaling Museum in partnership with the Consulate of Portugal in New Bedford and the Center for Portuguese Studies and Culture of UMass Dartmouth.

The NRP Sagres III, commanded by Paulo Alcobia Portugal, was built for the German Navy in 1937.Under the name ‘Albert Leo Schlageter’ the vessel served in the World War II until being captured by the American forces. Handed over to Brazil in 1948, Sagres was incorporated into the Portuguese Navy in 1962.

Since then, Sagres has called at 113 foreign ports, in 45 countries, and has carried out three world circumnavigations in 1978-79, 1983-84 and 2010. Sagres also provides training cruises to cadets of the Portuguese Naval Academy every year.

Sagres, which is due to arrive back in Portugal in September, departed from Lisbon on May 26, making her first stop at Hamilton Harbor, Bermuda, where it was hosted by the local Portuguese resident community.