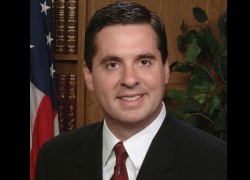 Nunes, 41, is a six-term republican representing California’s 22nd congressional district in the San Joaquin Valley. He will replace Michigan Rep. Mike Rogers, who decided not to seek another term.

“Today we face a sophisticated and determined terrorist enemy that is intent on killing more and more Americans, not to mention innocents around the globe,” Boehner said in a statement. “We also face rogue states like Iran and North Korea that continue to thumb their noses at the United States. The world is becoming increasingly dangerous and the Intelligence Committee is vital to our efforts to protect the American people. Over the past four years, Devin has been instrumental in ensuring that our intelligence professionals have the resources they need to keep America safe. He has asked the tough questions and conducted serious oversight to hold the Obama administration accountable. I look forward to working with him as the next chairman of the Intelligence Committee.”

Nunes was first elected to public office in 2002 when he was 22 years old. He is a member of two committees in the House of Representatives, Ways and Means, where he is chairman of the Subcommittee on Trade and Permanent Select Committee on Intelligence. He is also co-chair of the Brazil Caucus and the U.S.-Mexico Friendship Caucus.

Devin Nunes of Azorean Portuguese descent was born in Tulare, California. His family has operated a farm in Tulare County for three generations.