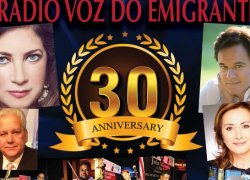 Radio Voz Do Emigrante celebrates its 30th Anniversary with a gala event to be held on Saturday, March 17, at Venus de Milo, in Swansea, Massachusetts.

Founded in March 17, 1988 by Frank P. Baptista, Radio Voz Do Emigrante serves the Portuguese-speaking community of the South Coast area of Massachusetts and the state of Rhode Island.

Fatima Campos Ferreira is the guest of honor. She is a veteran Portuguese television journalist, from the Lisbon based RTP International, where she hosts “Pros e Contras,” a television show broadcast in the Portuguese-speaking countries around the world. Luis Pires, a radio, television and newspaper personality will be the master of ceremonies.

Thirty community personalities will be honored at the event for their contributions to the Portuguese-American community of the SouthCoast Massachsuetts area and the state of Rhode Island. 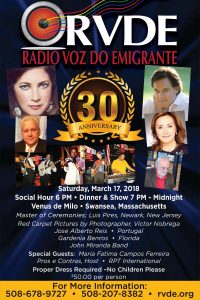 The late Frederico Pacheco of Bristol, RI, will be recognized posthumously for his contributions to the Portuguese community and his weekly appearance on “Radio Voz do Emigrante.” An award will be also presented posthumously to the late Paul Gelzinis for enabling the existence of the radio show.