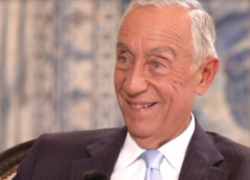 The President of Portugal, Marcelo Rebelo de Sousa, is visiting California, from September 23 to 29, at the invitation of the resident Portuguese American community, where he will participate in several community events.

Although no official program is available, his itinerary will include stops in San Diego, Artesia, Turlock, Gustine, San Jose and San Francisco, where he is scheduled to visit with local officials, community members and dignitaries.

President Rebelo de Sousa is scheduled to appear 4pm, on Sunday, September 25, at the Gustine Pentecostal Society Portuguese Hall, located at 500 3rd Ave., where Gustine Mayor Pat Nagy is scheduled to present Rebelo de Sousa with a key to the City, according to a City of Gustine news release. His visit to Gustine is one of several stops planned in California during the upcoming days.

While in the Bay Area, the President of Portugal will be also in attendance as the ballpark celebrating Portuguese Heritage Night for the eighth consecutive year. 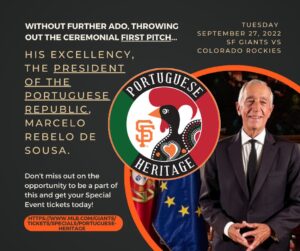 According to the local Consulate General of Portugal, Rebelo de Sousa is scheduled to throw the ceremonial first pitch at the San Francisco Giants/Colorado Rockies game Tuesday, September 27, in celebration of Portuguese Heritage Night. (Click on image to enlarge)

The game is scheduled to start at 9:45 EST. Both teams are part of Major League Baseball’s National League West division.

According to the San Francisco Giants’ website, the joined celebration originates from a community partnership with the Northern California Portuguese community.

He is also scheduled to appear at Stanford University on Monday, September 26, for a panel discussion titled “Sustainable Solutions for Portugal and California.”

In his visit to California, President Marcelo Rebelo de Sousa is accompanied by other dignitaries from the Portuguese Ministry of Foreign Affairs including, the Ambassador of Portugal to the United States, Francisco Duarte Lopes; the Secretary of State for the Portuguese Communities, Paulo Cafôfo; and the Consul General of Portugal in San Francisco, Pedro Pinto. He returns to Portugal on September 29.

California is home to about 350,000 Portuguese Americans, the majority with roots in the Azores, the largest concentration of Americans of Portuguese descent on the West Coast, mostly San Diego, Artesia, San Jose, San Francisco, Turlock and Gustine.

A moderate center-right politician, Marcelo Rebelo de Sousa won a second term as President of the Republic, on January 2021. As President, he holds a largely ceremonial role, with limited presidential powers, such as appointing the Prime Minister and Council of Ministers, in which the President must be guided by the election results; dismissing the Prime Minister; dissolving Parliament and call early elections; vetoing legislation, which may be overridden by Parliament; and declaring a state of war or siege.