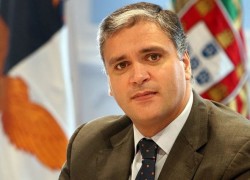 The President of the Government of the Azores, Vasco Cordeiro, is in California for a three-day official visit with stops in Sacramento, San Jose, Tulare and Hilmar.

On Tuesday, President Cordeiro met in Sacramento with State Governor, Jerry Brown, where he spoke of the importance of strengthening the cultural and affective ties between the Azorean resident community and the Azores.

“We want to develop policies that deepen relationships and highlight the assets that the Azores have to offer as a gateway to the European Union and for the development of cutting-edge initiatives such as renewable energies and the commercial use of the sciences of the ocean,” he said.

Following the meeting with the State Governor, president Cordeiro also met with several State congressmen and senators, including Tony Atkins, president of the California State Assembly, having also attended day sessions in the House of Representatives and the Senate.

On Wednesday, President Cordeiro met with the president of the State Senate, Darrell Steinberg, followed by a stop in San Jose to visit Silicon Valley to meet with Portuguese entrepreneurs of Azorean descent and members of the Young Portuguese Americans of California.  In the evening, he presides at the welcoming banquet in his honor promoted by the Azorean resident community.

On Thursday, President Cordeiro will visit Tulare, home to a large Portuguese community of Azorean descent, estimated at 95% of the total population of the city. Tulare is also a sister city with Angra de Heroismo on Terceira island.

On Friday, on August 29, in Hilmar the President Cordeiro will preside to the 17th World Council of Houses of the Azores [Conselho Mundial das Casas dos Açores (CMCA)] the main objective of the visit.

Representatives of 13 Casas dos Açores from  around the world are participating in convention namely representatives from Lisbon and Algarve (Portugal mainland); Quebec, Ontario and Winnipeg (Canada); Hilmar and New England (USA); Rio Grande do Sul, Santa Catarina, Rio de Janeiro and Sao Paulo ( Brazil); and representatives from Uruguay. This is the first time the annual CMCA convention takes place in California.

Other invited guests include the Portuguese Ambassador in Washington, Nuno Brito; the Portuguese Consul General in San Francisco, Nuno Mathias; the Portuguese Honorary Consul in Tulare, Diniz Borges, and representatives from the Legislative Assembly of the Azorean parliament.

It is estimated that over a 1 million Portuguese of Azorean descent live in the United States, one third of them in California.