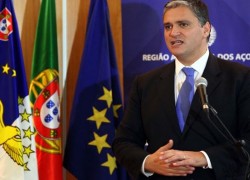 The President of the Government of the Azores, Vasco Cordeiro, will travel to Canada next week on a four-day visit to meet with the Azorean-Portuguese resident communities of the provinces of Quebec, Manitoba and Ontario.

Starting on Monday, December 1, President Cordeiro will visit community organizations and will meet with local business leaders to address investment opportunities in the Azores.

Also on Monday, President Cordeiro will meet with representatives of the Casa dos Açores of Quebec, followed by a meeting with the resident Azorean-Portuguese community in the province.

On Tuesday, President Cordeiro participates in Montreal in a working meeting with Canadian and Azorean entrepreneurs, sponsored by Sociedade para o Desenvolvimento Empresarial dos Açores (SDEA), to address investment opportunities in the Azores. The meeting is followed by a visit to Casa dos Açores of Winnipeg, where President Cordeiro will meet with representatives of the Azorean-Portuguese resident community.

On Wednesday, President Cordeiro visits the Lar de Santa Isabel of Winnipeg, a non-profit housing project supported by the resident Azorean-Portuguese community of Manitoba, followed by a meeting with local community business leaders.

On Thursday, the last day of his visit to Canada, President Cordeiro travel to Toronto to meet with representatives of the Azorean-Portuguese resident community in the Ontario Province, at the Harbord Collegiate Institute, one of the first high schools to offer Portuguese language classes in Canada. The event is followed by a meeting with local business representatives sponsored by SDEA.

The first wave of Portuguese immigrants in Canada settled in Halifax in 1953. Estimated at about 400,000 – the majority of Portuguese-Canadians have roots in the Azores.

The Azores  (population 250,000) is a region of Portugal composed of nine islands. The archipelago discovered by Portuguese explorers in the 15th century, became an Autonomous Region of Portugal in 1976. The government of the Autonomous Region of the Azores includes the Legislative Assembly, composed of 57 elected deputies, elected by universal suffrage for a four-year term; the Regional Government and Presidency, with parliamentary legitimacy, composed of a President, a Vice-President and seven Regional Secretaries responsible for the Regional Government executive operations. The Autonomous Region of the Azores is represented in the Council of Ministers of the Central Government by a representative appointed by the President of Portugal.Vasco Cordeiro, 41, the leader of the Socialist Party (PS) in the Azores, was sworn Regional President of the Government of the Azores on October 14, 2012.