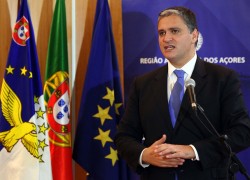 The President of the Regional Government of the Azores, Vasco Cordeiro, will preside, as the guest of honor, to the 29th Heritage Day of Portugal celebrations to be held in the House of Representatives of the Massachusetts State House, scheduled to take place from 10 a.m. to noon, Tuesday, June 4.

The statewide event recognizes people of Portuguese heritage who help make Massachusetts a better place, as well as Portuguese community advocates, regardless of ethnicity, who have helped Portuguese people advance in the state or across the United States.

“It’s a true honor to participate, as President of the Government of the Azores, in this initiative which will celebrate the role that the Portuguese community has played and continues to play in the development of the state of Massachusetts,” said Vasco Cordeiro. “I am sure that it will also be a moment to remember and recognize the particular contributions of the Azorean community in this process,” added Cordeiro in a prepared statement released to the press.

A select group of 15 Portuguese-American individuals will be recognized, with the Heritage Day of Portugal Medallion, for their contributions to the welfare of the Massachusetts’ Portuguese community.  A reception will follow in the Great Hall. The event is free and open to the public.

The Heritage Day of Portugal was established in Massachusetts by former State Representative Robert Correia, with members of the Portuguese Legislative Council, in June of 1985, as part of the “The Day of Portugal” celebrations taking place in Portugal on the 10th of June.

The date honors the life of Luís de Camões, Portugal’s national poet who died on the 10th of June 1580. Camões wrote  Os Lusiadas, Portugal’s national epic poem celebrating the country’s 16th century maritime achievements. For the Portuguese people living abroad, the Day of Portugal is also the time to showcase their heritage and ethnic pride.