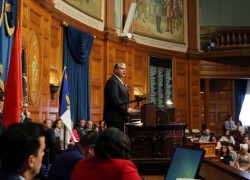 The President of the Government of the Azores, Vasco Cordeiro, was the guest of honor at the 35th Portuguese Heritage Day held June 4 at the Massachusetts State House.

President Cordeiro was invited by the members of the Portuguese American Legislative Caucus of the Massachusetts House of Representatives, led by Senator Marc Pacheco and Representative Tony Cabral, who presided at the ceremony.

This year 21 personalities were honored, with the Portuguese Heritage Award, 8 of them of Azorean descent, for their contributions on behalf of the community in various domains.

It is estimated that more than 500 thousand Americans of Portuguese descent, the majority with roots in the Azores, reside in the State of Massachusetts where Portuguese is the second most spoken foreign language after Spanish.