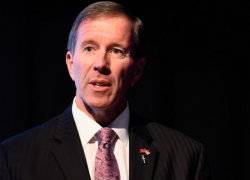 The Premier of Bermuda, Michael Dunkley, will visit the Azores officially, Monday May 2-5, at the invitation of Vasco Cordeiro the President of the Government of the Azores. He will visit the islands of São Miguel, Faial, and Pico.

The invitation was formalized in June 2015, to mark 165 years of Azorean emigration to Bermuda. During his visit, a Memorandum of Understanding will be signed to strengthen bilateral relations, including the preservation of Azorean culture and popular traditions in Bermuda and cooperation relating to ocean policies and marine conservation.

While in São Miguel, Premier Dunkley will visit the Geothermal Power Station in Ribeira Grande, the Nonagon Science and Technology Park and will meet with local entrepreneurs at SDEA, the business development association of the Azores.

In Faial, Premier Dunkley, accompanied by the President Cordeiro, will meet with the President of the Legislative Assembly of the Azores followed by a visit to the Capelinhos Volcano Interpretation Center and the Department of Oceanography and Fisheries of the University of the Azores. In Pico, the visit includes the Wine Museum, the Pico vineyards listed as a World Heritage site by UNESCO and the local Whaling Museum.

Bermuda, population 64,237 (2010), is a British overseas territory located in the North Atlantic, which was a destination of Azorean emigration from the first quarter of the nineteenth century. Bermuda and the Azores have significant historical ties, as well common challenges due to their insular geography. The Azores was one of the signatories of the Hamilton Declaration on Collaboration for the Conservation of the Sargasso Sea, adopted in Bermuda on March 11, 2014. It is estimated that about 20 to 25% of Bermuda population today is of Portuguese descent, of which 90% is of Azorean origin.