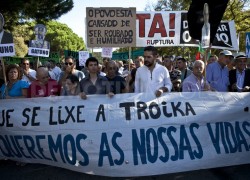 Members of the Portuguese community are gathering outside the Boston Public Library, Saturday, March 2, at 6 pm, in solidarity with people back home, to protest against the severe austerity measures being implemented by Portugal’s center-right government led by Prime Minister Passos Coelho.

Protesters in Boston are joining a day of demonstrations which will also take place in more than 40 cities across Portugal and abroad.

The call for the demonstrations was made February 25, the day representatives of  the “Troika” – European Union, European Central Bank ,and International Monetary Fund – were to arrive in Lisbon to assess the state of Portugal’s economy.

In May 2011, Portugal was forced to demand a €78 billion ($104 billion) bailout from the “troika” which includes the International Monetary Fund (IMF), the European Central Bank and its EU partners.

The bailout, aimed to reducing the national deficit, included budget cuts and massive tax hikes. The measures have caused a sharp rise in unemployment affecting 17% of the workforce.

Protests are being organized by the “Que se Lixe a Troika” [Damn the Troika], a movement known for having organized recent demonstrations in Portugal which have gathered thousands of people.

Protesters are saying “We can’t take it anymore!” and asking for an “end” to the austerity measures which they believe have impoverished the country. Protesters are also demanding the resignation of Prime Minister Passos Coelho and calling for early elections.