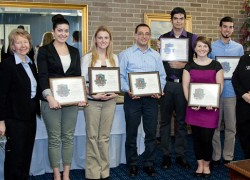 Four community members were inducted as honorary members of the society because of their service, scholarship or advocacy in the promotion of Portuguese studies, the Portuguese language and Portuguese, Brazilian and African Lusophone cultures at Rhode Island College and in the community.

The honorary members are George Monteiro Brown University professor emeritus of English, Portuguese and Brazilian studies; João Luís Morgado Pacheco, Conselheiro das Comunidades Portugueses and board member of the Institute for Portuguese and Lusophone World Studies (IPLWS); António Ambrósio, RIC Class of 2005, chair of the IPLWS board; and John Lema Jr., benefactor of the John A. and Mary V. Lima Scholarship in Portuguese Studies at Rhode Island College.

The 2013 John A. and Mary V. Lima Scholarships were also presented during the ceremony to Neves and Viveiros, as well as RIC student Justin Soares. The scholarships are given annually to students who demonstrate high academic achievement and a commitment to studying Portuguese at Rhode Island College.

The inductees and scholarship recipients were honored during a ceremony April 10 in Roberts Hall. Monteiro was the keynote speaker.

Rhode Island College President Nancy Carriuolo, who also spoke during the event, noted that the establishment of the local chapter of the Portuguese Honor Society at RIC was a “milestone” for the Portuguese studies program. She also noted that the program “has been built on excellent faculty and students.”