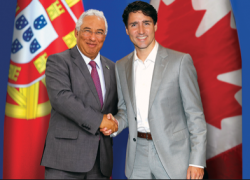 The Prime Minister of Portugal, António Costa, arrived in Canada for an official visit May 2-5, 2018. It is the first of a number of visits by Portuguese officials to North America in the Spring 2018.

Costa’s trip to Canada includes stops in Ottawa, Toronto and Montréal where he is meeting with Canadian government officials, such as the Governor General, as well as members of the country’s Portuguese community. It is the first formal visit between Prime Minister Costa and his Canadian counterpart, Justin Trudeau.

An agreement for easing youth mobility regulations between the two countries was announced on Costa’s first day in Ottawa.

Trudeau will accompany Costa to events in Ottawa and in Toronto, including an event hosted by the Economic Club of Canada, as well as a performance by Portuguese fado singer Camané.

In Montréal, the visit takes a cultural turn with a stop at the Canadian Centre for Architecture, home to a part of Portuguese architect Álvaro Siza Vieira’s archives.

Costa’s visit occurs months after the implementation of CETA, the Comprehensive Economic and Trade Agreement, on September 21, 2017 between Canada and the European Union and weeks before Canada hosts the annual G7 summit in Charlevoix, Québec in early June. Costa described the CETA agreement as providing a great opportunity for Portugal to increase its economic, political and cultural ties with Canada.

In a news release announcing the trip, the Canadian Prime Minister emphasized its economic importance: “Canada and Portugal enjoy a strong and historic bond, with nearly a half-million people of Portuguese origin calling Canada home. I look forward to meeting with Prime Minister Costa to deepen our relationship and create economic opportunities that will benefit Canadians and Portuguese people alike,” he said.

The trip provides a preview of Portugal’s diplomatic priorities in North America before the Prime Minister’s next transatlantic visit.

António Costa will soon return to North America, joining Portugal’s President Marcelo Rebelo da Sousa and Vasco Cordeiro, President of the Regional Government of the Azores, for celebrations on June 10, 2018, commemorating Day of Portugal, of Camões and the Portuguese Communities, in Boston, Massachusetts, and Providence, Rhode Island. Costa will close the visit with a stop in California June 11-14.

President Rebelo da Sousa will visit the United States between June 4-14, 2018. It is expected that he will meet with US President, Donald Trump.

updated 5/5/2018
———————
Cristina Ogden is a freelance writer and blogger based in Western Canada. She writes on issues concerning the arts and culture of both Portugal and Canada. Her articles, essays and reviews have appeared in journals, anthologies and news sites in Europe and North America.