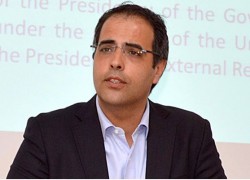 The Regional Director for the Azorean Communities, Paulo Teves, will be visiting California and Massachusetts, February 20-25, in representation of the Government of the Azores.

On the West Coast, February 21, Teves will meet with a group of  students of Azorean descent in San Francisco to address the promoting the Azorean cultural heritage amongst the younger generations.

On 22 February, the Regional Director of the Azorean Communities will preside, as guest of honor, to the centennial celebrations of the Holy Ghost Brotherhood of San Jose.

On the East Coast, on February 24, Teves will meet in Fall River, Massachusetts, with the organizing committee of the Great Feast of the Holy Ghost of New England and will visit the Casa dos Açores of New England.

On February 25, the representative of the Government of the Azores will visit the Massachusetts Alliance of Portuguese Speakers ( MAPS) in Somerville, Greater Boston.