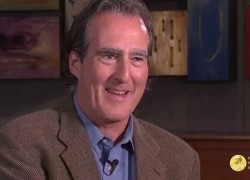 Scientist Craig C. Mello, awarded the 2006 Nobel Prize in Medicine, will be honored by the Portuguese American community at an event taking place November 10, from 10 am to 2 pm, at The Cove Restaurant, 392 Davol St, Fall River, MA.

Born in New Haven, Connecticut, Craig Mello has roots in Maia, São Miguel, Azores, the homeland of his great-grandparents, Eugénio de Mello and Glória Barracôa, who left the parish of Maia in 1907 for the United States with four children.

A biologist and a professor of Molecular Medicine at the University of Massachusetts Medical School, in Worcester (MA), Craig Mello shared the Nobel Prize with biologist Andrew Fire for the groundbreaking discovery of RNA interference.

Their research, conducted at the University of Massachusetts Medical School, has helped to establish that the RNA interference not only has become an indispensable means for studying gene function but has been found to be a normal part of gene regulation during embryonic development and may play a role in cancer and other diseases.

The event, open to the public, consists of an address by Craig Mello and the presentation of a book about the Nobel Laureate authored by Professor Graça Castanho, from the University of the Azores, and Professor Lurdes Serpa from Lesley University, Cambridge, Massachusetts, followed by the celebration of Craig Mello’s 58th birthday, born October 19, 1960. 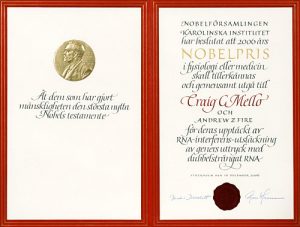 The recipient of many awards and honors, Craig Mello visited the Azores for the first time in 2009 where he presented the original Nobel Prize diploma to be part of a permanent exhibit in his honor. In 2012 he was awarded a Doctor Honoris Causa honorary degree in Biochemistry and Biology by the University of the Azores. He returned in 2018 to be honored by the people of Maia his ancestral home.

The event was organized by Professor Graça Castanho in partnership with Casa do Povo da Maia [Maia Community Center], which will be represented with a delegation headed by Jaime Rita. Professor Graça Castanho is the former Regional Director of the Communities of the Regional Government of the Azores and former Coordinator of the Teaching of Portuguese in the United States and Bermuda.

Tickets ($30) are available at Portugália and Tabacaria Açoriana in Fall River. For more information contact Professor Graça Castanho at mgbcastanho60@gmail.com