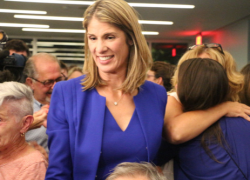 Trahan beat Republican Rick Green and independent Mike Mullen to win election with 61% of the vote.

A record 98 women won seats in the House of Representatives on the midterm elections. Trahan joins Katherine Clark and Ayanna Pressley as Massachusetts women in Congress.

“There’s too many families feeling the anxiety of living paycheck to paycheck,” she said.

She also remarked, “People are tired of gridlock and they’re tired of no check and balance on this administration,” and she added, “I think this midterm was about holding this administration accountable. The Congress is a co-equal branch of government and frankly, it’s one that hasn’t really been operating to its full function. So we’re going to get to work.”

Trahan, 44, a resident of Westford, has lifelong roots in Lowell, She is the granddaughter of Portuguese immigrants. Her grandparents are Fernando de Freitas Loureiro from Figueira da Foz, mainland Portugal and Adalice Teodomira Cunha Leite born in Bahia, Brazil. After the death of her mother, her grandmother was sent to live with relatives in Graciosa, Azores. Both grandparents migrated to the United States in late 1930’s where they married in Lowell in 1944.

Trahan’s mother is a homemaker who cleaned houses and her father Tony Loureiro is a Lowell ironworker and union organizer. She played volleyball at Lowell High School and went Georgetown University on a volleyball scholarship and later worked as a chief of staff for US Rep. Martin Meehan (D-Lowell) from 1993-2007.

A mother of five, she dedicates herself helping other women into leadership through a business consulting firm she has founded with two other women.

“I’m thrilled,” she said. “This year has been a very rewarding one. I’ve had thousands of conversations across the district. I plan to fight for their families and futures every day.”
Lowell, with a population of 106,000, is the largest city in the Merrimack Valley-based district with a large community of Portuguese and Brazilian residents.

The 3rd Congressional District extends from Haverhill in the northeast through Lawrence and Lowell in the Merrimack Valley, to Gardner and Fitchburg in the west, and southward through Concord and the Nashoba Valley to Hudson, Marlboro and Clinton.