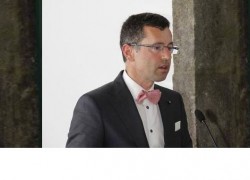 Mello, who is the chief librarian of the Ponta Delgada Municipal Library, was invited in 2003, by the Israeli Community of Lisbon, to coordinate the Azores Synagogue Restoration Committee overseeing the renovation and conservation project of the Sabar Hassamain Synagogue of Ponta Delgada.

Mello is also the author of  Sahar Hassamain Synagogue in Ponta Delgada (2009), a book which tells the story of the Synagogue and speaks of the importance to preserve the Jewish legacy in the Azores. Mello will speak his book, edited in both in Portuguese and English, and will present a slideshow of his research.

Built in 1836 in Ponta Delgada, the Sahar Hassamain Synagogue is the only surviving Synagogue on the islands and the oldest of Portugal’s remaining synagogues. The Sanctuary was established around 1820 by a group of Jewish entrepreneurs who migrated with their families from Morocco and settled on São Miguel island in the early 19th century.

After over 50 years of abandonment and neglect, a project to restore the Sahar Hassamain Synagogue is now underway. The undertaking has the support of the Ponta Delgada City Hall, the local community and the Israeli Community of Lisbon, together with the local Azorean community and Harvard University in the United States.

Dignitaries expected to attend include Boston attorney Robert Sherman, the newly appointed ambassador to Portugal, and representatives from the Israeli’s Consulate General and Portugal’s Consulate to New Bedford among other area state and federal representatives.

Open to the public, the event takes place on March 9 at 1 p.m. at Temple Beth El, 385 High Stree,t in Fall River, including live music and refreshments.

Fall River (MA), with a total population of 95,072, remains the city with the highest proportion of ethnically Portuguese residents (43.9%) in the United States. Ponta Delgada and Fall River are sister cities.