One of the most relevant community members of the Portuguese community in Southern California, he was born in the parish of the Altares, Angra do Heroísmo. He emigrated with his family to the United States  in 1966. 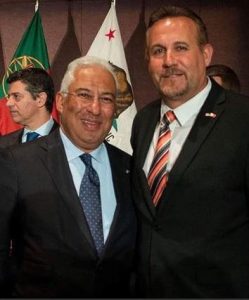 It was in this capacity that John Martins was a guest at the reception during the visit of to the Portuguese Prime Minister António Costa to California, which took the past week.

The President of the Government of the Azores, Vasco Cordeiro, expressed deep regret at the death of Honorary Consul of Portugal in Los Angeles, emphasizing his success as an entrepreneur and, above all, his civic involvement in the local Azorean resident community.

“In his many civic, political, cultural and professional roles in the United States of America, John Martins has always shown a high sense of public service, never forgetting his connection to his roots in Terceira Island and the Azores, “said President Vasco Cordeiro.

A talented musician, John Martins was known by many for his readiness to help, and the ability to motivate everyone. His friends speak of him as a generous, honest person, a “legend” of the California Portuguese community, loved by all.