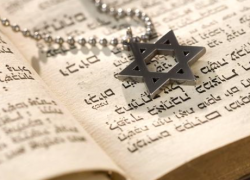 The event is the culmination of a 30 year struggle to save the Synagogue from ruin and preserve the Jewish legacy in the Azores. The synagogue, whose name means “Gates of Heaven” in Hebrew, now includes a museum and library memorializing centuries of Jewish-Azorean cultural life.

Among the invited is a group 80 personalities from southeastern Massachusetts, most of them from the Greater Fall River area. They include members of the original Azores Synagogue Restoration Committee established in Fall River during the mid-1980s; members of the Azorean-Jewish Heritage Foundation; a delegation of nine Massachusetts legislators led by Sen. Michael Rodrigues (D-Westport); and the Massachusetts Senate President Stanley Rosenberg. Local, national and international dignitaries are also participating in the ceremony. 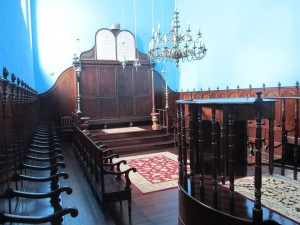 The restored Synagogue of Ponta Delgada
as it exists today.

The Sahar Hassamain Synagogue was established around 1820, by a group of Jewish entrepreneurs who migrated with their families from Morocco, and settled on São Miguel island in the early 19th century. The temple, the only surviving Synagogue on the islands, was consecrated by Abraão Bensaúde in 1836, and abandoned in the 1950s after the last members of the resident Jewish community left the island.

The restoration project was led by Azorean historian, José de Almeida Mello, who was appointed in 2003 to coordinate the Azores Synagogue Restoration Committee in Ponta Delgada. He co-founded with Delmar Soares and Nuno Bettencourt, the Friends of the Synagogue of Ponta Delgada, a group with the mission to reach out for support at the local, national and international levels.

At one point, the island of São Miguel was home to four synagogues in Ponta Delgada and one in Vila Franca do Campo. There was also a Jewish cemetery in Ponta Delgada and four additional Jewish burial grounds: one on São Miguel, one on Terceira, one on Faial and one on Graciosa island. According to José de Almeida Mello, the next step is to complete the identification of the other Jewish landmarks in the Azores with the goal to create an itinerary of the Jewish presence on the islands.

The restoration project, estimated at about $250,000USD, was launched on February 2014 and directed by Azorean architect Igor França. Professor Susana Goulart Costa, from the University of the Azores, was responsible for the museum project.

The goal now is to link the Synagogue of Ponta Delgada to the broader national tourism network, which includes synagogues in Lisbon, Tomar, Belmonte, and Castelo de Vide, in mainland Portugal.

The Jewish presence in Portugal dates back to two thousand years, before the country was established. The Jewish population in Portugal is currently estimated between of 5,000 to 8,000 individuals. According to a 2008 study, by the American Journal of Human Genetics, 19.8% of the Portuguese population has Jewish ancestry.