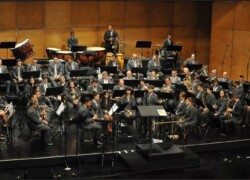 Portuguese American musician, Nuno Bettencourt, is organizing a joint concert with the Boston based Extreme rock band and the Azores based Harmonia Mosteirense Brass Band, to take place throughout the Thanksgiving holiday weekend in the town of Hudson, (MA), on November 26, and in the city of Fall River (MA) on November 27.

The concert, hosted by the Hudson Portuguese Club, gathering over a thousand people, is already sold out. The Fall River concert will take place at the Nossa Senhora da Luz Band headquarters.

According to the program, international musical celebrities will be featured, presenting a mixed repertoire mostly centered on popular songwriters such Stevie Wonder, The Doors, Chicago, The Beatles, Cheap Trick, Paul McCarthy, Zeca Afonso among others.

Founded in 1883, in the Mosteiros parish, on São Miguel Island, “Banda Harmonia Mosteirense” stands as one of the oldest and most awarded, popular brass bands of the Azores.

Currently, it comprises of around 60 members, aged between 8 and 68 years, presided by Manuel Fernando Almeida, with Carlos Sousa as its principal conductor.

Born in the Azores, in 1966, in Praia da Vitória, Terceira island, Nuno Bettencourt, is a singer-songwriter, record producer, and businessman, better known as the lead guitarist rock band Extreme.

Most recently, as the director of the production company Atlantis Entertainment, Nuno Bettencourt, conceptualized and was responsible for the organization of the world musical festival, Atlantis Concert for Earth, held on July 22 and 23, in the iconic Lagoas das Sete Cidades, on São Miguel Island, Azores.

“We’ve been working with Nuno Bettencourt for a few years now. In 2018 and 2019 we were with them at the Festas da Praia da Vitória, in Terceira, and this year we were invited by Nuno to participate in the festival of Sete Cidades, in promoting the event,” said Manuel Almeida, as reported by Açoriano Oriental, adding that the invitation to come to the USA happened after the Sete Cidades concert.

“We are going to be featured with the world’s musical giants, including Extreme, and this is perhaps the highest point of our history as a philharmonic band,” remarked Manuel Almeida.

Extreme is an American rock band formed in Boston, Massachusetts, in 1985, that reached the height of their popularity in the late 1980s and early 1990s with original lineup Gary Cherone, Nuno Bettencourt, Paul Geary, and Pat Badger. 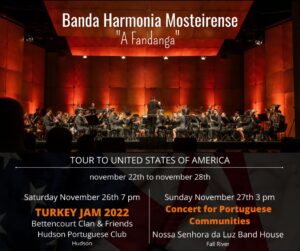