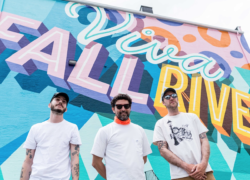 The third edition of the ‘Fabric Arts Festival’ under the title ‘Where We Meet’ returns to of Fall River, Massachusetts, May 12-14, to a celebration of arts and communal experience.

The festival will honor the urban and social fabric of the city, which is interwoven with the industrial heritage of textile mills and a deeply rooted in the Portuguese cultural heritage.

Portugal-based curators and fellow co-founders Jesse James and Sofia Carolina Botelho, directors of a similar festival in the Azores, will also contribute and participate.

According to the festival agenda, “This edition finds inspiration in the diasporic aesthetics, languages and codes that shape the city of Fall River, to propose a program featuring public art, music, talks and workshops. We will look at Fabric as a “festa” (party in Portuguese), a place that welcomes multiple bodies, minds and ideas, intersecting everything we are, all the places we’ve been, our desires and hopes.”

The event will feature visual arts and architecture, which will include the unveiling of three new public art installations along the Quequechan River Rail Trail; showcasing music and sounds; and  ‘A Table for Many’ by creating communal tables, inviting guests to share a culinary experience.

According to the event organizers, “Table for Many” will be hosted at the Police Athletic League and at the Narrows Center for the Arts, and will be a meeting space of  “experimentation and intersection between the arts and gastronomy.” The event seating is limited.

Fall River is a city in Bristol County, Massachusetts, United States, with a population of 94,000, according to the United States Census (2020), making it the tenth-largest city in the state. Home to many Americans of Portuguese heritage, the city is known as a lively center of Portuguese culture, its numerous 19th-century textile mills and Battleship Cove, and home of the world’s largest collection of World War II naval vessels.

Fall River remains the city with the highest proportion of ethnically Portuguese residents (43.9%) in the United States.