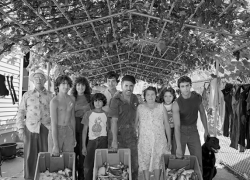 The temporary exhibit which opens on Wednesday, August 29th, will be on continuing view at the Boott Cotton Mills Museum, 115 John Street, Lowell, Massachusetts.The exhibit is sponsored in part by Enterprise Bank.

Following up on the 2015 exhibition, “The Lure of the Spindle: The Portuguese in Early 20th Century Lowell,” the new exhibition explores both waves of Portuguese immigration to the city: the first, from the 1890s to 1924, associated with the textile industry; and the second, from the late-1950s to the early 1980s, associated with the older manufacturing and newer high tech industries. The second wave, triggered by the Capelinhos volcanic eruption in the Azores that led to the Azorean Refugee Acts of 1958/1960, was increased considerably by the Immigration and Nationality Act of 1965. 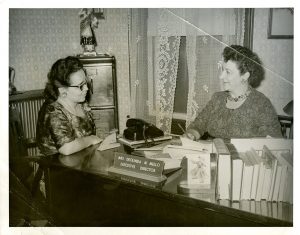 The exhibition examines how individuals and families made a living in the mills and later in the manufacturing and high-tech industries, in both instances attaining a measure of the “American Dream” that allowed for improved professional opportunities for their children. The second wave reinvigorated Portuguese language, culture, and identity in Lowell’s Portuguese neighborhood of “Back Central,” with Saint Anthony’s Parish continuing to serve as the hub for the immigrants’ spiritual needs and cultural and social activities. The Portuguese contributed to Lowell society in many ways, including by participating in civic activism that led to the Azorean Refugee Act, saved their tight-knit neighborhood from the Lowell Connector highway extension, and protested the closing of local factories.

The research and curating team – comprised of Prof. Robert Forrant and UMass Lowell students Molly Mahoney and Kady Phelps, the designer Kelly Freitas, Dr. Gregory Fitzsimons, and Prof. Frank Sousa, director of the Saab Center for Portuguese Studies – made use of documentation from the UMASS Lowell Center for Lowell History, the Lowell Historical Society, the International Institute of Lowell, the American Folklife Center, Saint Anthony’s Parish, the John F. Kennedy Library, the Ferreira-Mendes Portuguese-American Archives at UMass Dartmouth, and other public and private collections in order to develop the exhibition.

For more information, contact the Saab Center for Portuguese Studies by calling (978) 934-5199 or writing to natalia_melo@uml.edu.