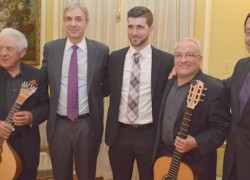 Ambassador Brito was the gracious host for a memorable evening on May 28, 2015 featuring Fado Music at the elegant residence on an edge of the beautiful Rock Creek Park in Washington. This event was made possible by the Embassy Series in its continued effort towards uniting people through musical diplomacy.

“Speak soft and carry a big stick,” were some words of wisdom from Teddy Roosevelt, who possessed both the strength of character as well as diplomatic finesse. He was the first President of United States to receive the Nobel Peace Prize in 1906 for helping end the armed conflict between Japan and Russia.

His Excellency Nuno Brito, as the diplomat par excellence representing Portugal, speaks softly with a razor sharp wit that disarms everyone. Through artful diplomacy Ambassador Brito’s words lifted the audience and flying across the oceans, without leaving their seats, into the Alfama or Bairro Alto neighborhoods of Lisbon listening to the tearful ballads lost sailors, bittersweet romances and broken hearts.

“O waves of the salty seas, where do you get your salt? From the woman in black on the sad shores of Portugal?”  Such are the stories and themes of Fado, which many believe has its origins in Moorish Spain.

Seven years ago, while mourning the death of the first American Fadista Maria Alves in May 2008, the SouthCoastToday wrote, “Fado has been called Portuguese blues. It grew up in the poor neighborhoods in Lisbon in the 1900s and developed into an elegant music of love, longing and despair. One recurrent theme in fado is of loss felt by immigrants and the yearning for home.” 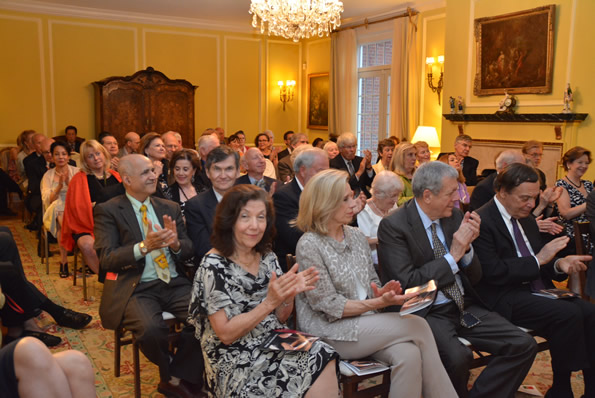 In his remarks, Ambassador Brito always encourages audiences to visit Portugal. So it is appropriate to note what people are saying about their recent visits to Portugal. For instance, on May 26, 2015 Alice H of a visitor from Bisbee, Arizona wrote on the TripAdvisor website about Sr. Fado de Alfama on Rua dos Remedios 176: “An absolutely great evening. What a memorable evening. The food is delicious. But, it is the ambience, the amazing energy and the dire of both Duarte and Marina to make sure their guests have a full and rich evening both of food and of course their beloved Fado music.”

Perhaps much more can be said about the concert at the Portuguese Ambassador’s residence.  The beauty of which is the manner in which the evening unfolded. You could feel the same Lisbon Blues on Kalorama Road that you might get immersed in on Rua dos Remédios or Rua Diário de Notícias.

Great hosts and event organizers always let the artists shine for they are the show. So like magicians, Ambassador Brito, his staff, Jerome Barry and the Embassy Series staff, bring artists on the stage and just get out of the way for the evening. With their exceptional talents, the musicians take the audience through the alleys of Lisbon, Porto and on boat trips along the river mingling with both the homeless for whom the sky is the roof and for the rich with palatial houses whose souls are searching for a home.

It was as if Maria Alves, who was recognized by the US Senate in 2007 as the first American Fadista had come alive. Or maybe Amalia Rodrigues had a second coming. It was as if everyone was at the Sagres Restaurant in Fall River, Massachusetts at one moment and in “La vie en Rose” in the next breath. But instead in their place was the promising young Fadista, Pedro Botas with the guitarists from The Azores, Manuel Leite and Viriato Ferreira.

Perhaps Facebook, Twitter and Instagram accounts will chronicle the amazing experience of the many prominent people attending this event – a number of PhDs, medical doctors and dentists. Among them is John Dassoulas, a famous rocket scientist, who is a recipient of the Distinguished Public Service Medal from US Department of Defense. Also present was Dr. Ina von Ber, founder of the World Diplomatic Forum and Ambassadorial Roundtable. 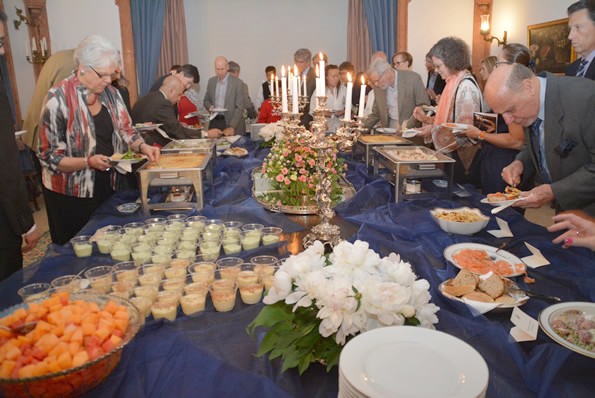 Reception at the  Portuguese Ambassador’s residence.

Also in the audience was Anne Howard-Tristani, a niece of the late Vice President Hubert Humphrey. Over dessert, she shared with friends the night at the Houston Astrodome the previous memories of the presidential campaign of Hubert Humphrey who lost by a very narrow margin. As the conversation continued, Alison Adler remembered the Beatles concert at the Washington Coliseum in 1964.

The recollection of long lost memories fit in so well on this beautiful Fado night.

Politicians will go to great lengths to get votes, but as a patron of the arts, former Congressman John drove hundreds of miles from Tennessee just to participate in this concert. At dinner time, he preferred to stand and let others have a seat.

Ambassador Brito engaged guests with polite conversation and Joana Castro followed up by walking some of the guests to the door at the delightful evening’s end.

Embassy Series not only is uniting humanity through musical diplomacy, but also becomes an avenue to see the humanity in the loving people who have become its ardent supporters.