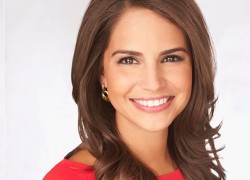 Born to Portuguese parents, who emigrated from the Minho region of mainland Portugal, Diane is fluent in both Portuguese and Spanish. She grew up in Mineola, NY, where she learned to appreciate the hardships of immigration.

A former Fox News Business Network  anchor and reporter, she is leaving CBS-owned WCBS New York station, where she was a weekend morning anchor, to join the ABC News team.

ABC News president, James Goldston, called Macedo, “A skilled and versatile journalist.”  He told ABC News staffers, “Her love for news developed early in life, discussing news of the day at the dinner table and later learning the basics of broadcast news at the local program NewTV while studying at Boston College.”

“I’m pleased to announce that Diane Macedo is joining ABC News as anchor of World News Now and America This Morning and will be a New York-based correspondent starting today.

“A skilled and versatile journalist, Diane joins us from WCBS in New York where she covered many of the biggest recent stories in the Northeast, including the death of Eric Garner, the East Village building explosion, the Philadelphia Amtrak derailment and the WDBJ shooting in Virginia.

“Previously, Diane was a reporter and anchor at the Fox Business Network, as well as news editor for FoxNews.com.

“A daughter of parents who immigrated from Portugal, Diane is fluent in both Portuguese and Spanish. Her love for news developed early in life, discussing news of the day at the dinner table and later learning the basics of broadcast news at the local program NewTV while studying at Boston College.

“The tireless Reena Ninan will return to dayside reporting. Reena has done a terrific job leading the charge overnight on some of our biggest breaking stories, from the Paris terror attacks and the tragic shooting in Charleston to the Freddie Gray protests in Baltimore and the devastating earthquake in Nepal.

“Diane joins our brilliant number one overnight team. They are often the unsung heroes of this news division, on the front lines of our coverage when news breaks and continually driving the conversation into each day. We’re grateful for their incredible work through each and every night, and I’m excited to see Diane join Kendis, Ken and the team. Please join me in welcoming her to ABC News.”