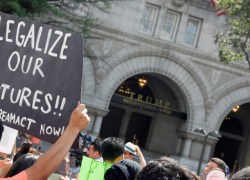 DACA was approved in 2012, by President Barack Obama, to protect undocumented residents who were brought illegally to the country as children. The program was approved conditionally until Congress would come with a solution.

On September 5, President Trump announced that he was ending DACA, arguing that the Obama Administration lacked the authority to create the program.

Nicknamed “dreamers” the DACA population was left without a path to legalization, no matter how long they have been in the country.

DACA allows young people, who have been brought to the US illegally as children, to receive a work permit and a social security number, in addition to protection from deportation.

According to US Attorney General Jeff Sessions, the program already being phased out will expire on March 5 of this year. The decision to end the program will force the deportation of an estimated 800.000 young immigrants from the United States.

In a new development over the weekend, after a US judge temporarily blocked on Thursday a decision by President Donald Trump to end DACA, the US Citizenship and Immigration Services announced that those who previously received a grant of protection under DACA, “may apply for a renewal under the terms in place before it was rescinded in September.”

Reportedly, Congress is currently in the process of negotiating with President Trump whether or not he will ratify new legislation granting legal status to the thousands of undocumented immigrants brought to the US as children.

Portuguese organizations that support Portuguese immigrants in Rhode Island, Massachusetts, New York, New Jersey, and California have concurred that DACA is a very popular program in their communities.