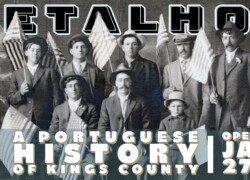 The Carnegie Museum is featuring an exhibit celebrating the many contributions of the Portuguese American community in Kings County, Hanford, California’s Central Valley.

The “Retalhos: A Portuguese History of Kings County” opening is taking place on January 27, and will stay open year-long, each Friday, on Saturday and Sunday, from 1:00p to 5:00pm.

Co-curated by Michael Semas, the display highlights the family stories of the first Portuguese settlers, most of them from the Azores, who emigrated in the 1890s, back to the early days of Hanford.

The Portuguese were among the very first European pioneers to come to California, attracted by the discovery of gold.

Many established themselves in vibrant urban communities in San Francisco, Oakland, San Jose, Santa Cruz, others settled as dairymen in the farming areas of the Central San Joaquin Valley, the Los Angeles Basin, and San Diego.

Cities like Stockton, Lodi and Hanford also attracted a large Portuguese immigrant population. The city of Hanford, for example, is home to the annual Festa do Espirito Santo, which is a traditional Azorean celebration that honors the Holy Spirit.

Established in 1905, the Carnegie Museum of Kings County, is a museum in Hanford, Central California, which main mission is to provide learning experiences for children and adults, on the the history of Kings County, for the present and future generations.

The Azores (population 250,000) is a region of Portugal composed of nine islands. The archipelago discovered by Portuguese explorers in the 15th century, became an Autonomous Region of Portugal in 1976. The government of the Autonomous Region of the Azores includes the Legislative Assembly, composed of 57 elected deputies, elected by universal suffrage for a four-year term; the Regional Government and Presidency, with parliamentary legitimacy, composed of a President, a Vice-President and seven Regional Secretaries responsible for the Regional Government executive operations. The Autonomous Region of the Azores is represented in the Council of Ministers of the Central Government by a representative appointed by the President of Portugal. According to the latest US census over 1.3 million individuals of Portuguese descent live in the United States, the majority with roots in the Azores. It is estimated that over 30,000 US citizens live in Portugal.