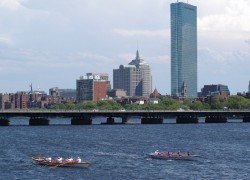 One of the most celebrated events of the Boston Portuguese Festival, the annual regatta in the Charles River is back to celebrate the common sea fare heritage to New Englanders and the people of the Azores.

In addition to the races, there will be a whaleboat sailing demonstration, tours on the boats, an award ceremony and an opportunity to listen to some of the rich oral history behind whaling.

Established in founded in 1997, the Azorean Maritime Heritage Society is a U.S. based non-profit organization promoting the historical contributions of Azorean sailors and whaleboat builders to the U.S. whaling industry. Based in New Bedford, MA, it maintains the Azorean Whaleman Gallery at the New Bedford Whaling Museum.

The event is an opportunity for the public to learn more about Azorean-Portuguese history and its ties with the New England whaling industry.

The Boston Portuguese Festival aims at contributing to the dissemination of the Portuguese culture and heritage in the capital city of Massachusetts, combining its contributions of the past with its contemporary manifestations.

Portuguese food will be served after the races, courtesy of our friends at Portugalia Marketplace. The event is free and open to the public.