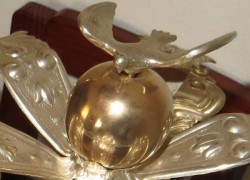 Thousands of people from all over the United States, Canada, Portugal mainland, Azores and Bermuda are expected to attend. The festival starts in Kennedy Park, on Wednesday, at 5pm, with the recitation of the Rosary followed by the traditional Holy Ghost Soup communal event. On Thursday, at 7pm, the illumination of Kennedy Park takes place followed by an evening of entertainment.

On Friday, the traditional blessing of the pensões takes place, at 7pm, presided by D. Francisco Jose Senra de Faria Coelho, Auxiliary Bishop of Braga, and Fall River Bishop Edgar Moreira Da Cunha. The pensões, consisting of gifts of sweet bread and meat, will be delivered to the community poor. The event is followed by an evening of entertainment.

The religious ceremony is followed by the Holy Ghost Coronation procession, starting at 2pm, with the participation of various Holy Ghost Brotherhoods and marching bands. The procession route starts in South Main Street continuing to Columbia and Broadway streets and Bradford Avenue to Kennedy Park.

Held annually in August since 1986, the Holy Ghost Festival has become one of the largest ethnic festivals in New England gathering over 200,000 people in the Kennedy Park area, featuring religious festivities, Portuguese food and entertainment. Admission is free and open to the public.

Holy Ghost Festivals are an integral part of the religious and cultural heritage of the Portuguese of Azorean descent. The tradition is based on the celebration of Pentecost, observed by the Catholic Church, marking the establishment of the Christian era.

The Portuguese connection with Fall River (population 95,072) started in mid-19th Century after waves of immigrants from the Azores settled in the city to work in the textile mills. Since then, Fall River became home to the highest concentration of Americans of Portuguese descent (43.9%), most of them with roots on São Miguel island.