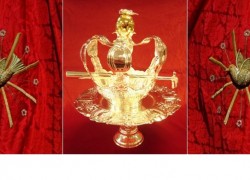 Held annually in August, the five-day event has become one of the largest ethnic festivals in New England.  More than 100,000 people, from all over the United States and abroad, are expected to gather at Kennedy Park over the weekend to take part in the religious festivities and enjoy Portuguese food and entertainment. Admission is free and open to the public.

One of the highlights of the festival is the ethnographic “Bodo de Leite” parade taking place on Saturday, August 23, departing from the Ponta Delgada Boulevard to Kennedy Park, via Columbia and South Main streets. Free sweet bread and milk will be distributed to all present at Kennedy Park.

The religious component of the festival takes place on Sunday, August 24, at 12:00pm, consisting of the Solemn Mass and Coronation at Saint Anne’s Church, co-celebrated by Bishop Manuel da Silva Rodrigues Linda of Portugal, and the Most Reverend George W. Coleman, Bishop of Fall River.

Holy Ghost Festivals are an integral part of the religious and cultural heritage of the Portuguese of Azorean descent. The tradition is based on the celebration of Pentecost, observed by the Catholic and Protestant churches, marking the establishment of the Christian era.

The Portuguese connection with Fall River (population 95,072) started in mid-19th Century after waves of immigrants from the Azores settled in the city to work in the textile mills. Since then, Fall River became home to the highest concentration of Americans of Portuguese descent (43.9%), most of them with roots on São Miguel island.