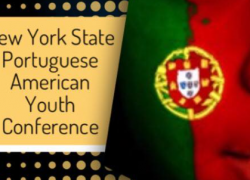 The Youth Conference is an event which, not only has the purpose to disseminate the Portuguese culture and language, but serves as one of NYPALC’s main commitments to the Community, which is to encourage and motivate the Portuguese American youth to accomplish great things while instilling in them a deep rooted love and pride of their Portuguese heritage.

This years’ program includes workshops, discussion panels and guest speakers who come from the most diverse different walks of life and, from the most diverse areas including arts, news, music, health and entrepreneurship. The speakers will be sharing about their lives as Portuguese Americans and will be an inspiration to our youth.

The PACC will offer free dinner to children 12 and younger, while others will be $30.00 (not including drinks).