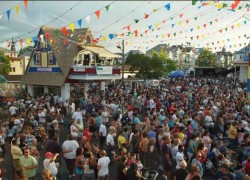 The Portuguese community of New Bedford, MA, is organizing the 2015 Feast of the Blessed Sacrament to be held over the weekend at the Madeira Field in the city’s North End’s area.

In its 101st edition, the event begins Thursday July 30 and ends Sunday August 2, gathering over 100,000 people coming from all over the United States, Canada and abroad.

On Sunday, the Feast of the Blessed Sacrament will host its annual traditional parade starting at 3 p.m. Over forty different organizations will march the one mile route from Brooklawn Park to the Feast grounds at Madeira Field.

Throughout the weekend, visitors will enjoy Portuguese food and refreshing beverages, live music, dance performances. Most of the entertainment events will take place at Madeira Field, on Madeira Avenue, with additional events scheduled at the Museum of Madeiran Heritage.

The Museum of Madeiran Heritage Madeiran, the only one of its kind in America, houses a comprehensive collection of photographs and artifacts that tell the story of Madeiran immigration to the United States.

The Portuguese connection to New Bedford began in the early eighteenth-century with the whaling industry. In the 1860s, the Portuguese in New Bedford, most of them from the Azores, comprised over 60% of whaling crews. From 1870 to 1924, many Portuguese from Madeira and mainland Portugal also migrated to New Bedford to work in the textile mills.  Today, about 40% of city residents say they are of Portuguese ancestry. Other ethnic groups include the Irish (8.2%), the Cape Verdean (10%), the Hispanic (16%) and the French-Canadian (14%). The population of New Bedford is estimated at 95,072, making the city the 6th largest in the state.

Visit the Feast of the Blessed Sacrament website here.