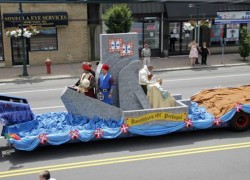 Thousands turned out on Sunday June 8th in green and red in Mineola not only to help commemorate the first ever Portugal Day Parade on Long Island in over 100 years that the community settled on the Island, but made it the largest parade in the Village’s 100 year history. Over 2,000 marchers representing 50 groups took to the streets riding on colorful floats, classic cars or just walking the 1.5 mile route which took a total 2 hours to complete in front of thousands of spectators. 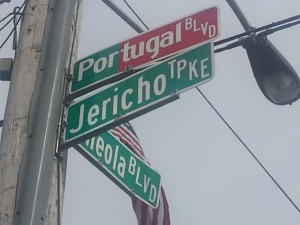 Jericho Tpke was renamed Portugal Blvd. for the day.(Photo by Gabriel Marques)

Village of Mineola Mayor Paul Pereira, the first local official elected who was born in Portugal, surprised participants by having Mineola’s largest street, Jericho Tpke, renamed “Portugal Blvd” for the weekend, with the signs being made by local resident and Portuguese-American Jorge Padinha. 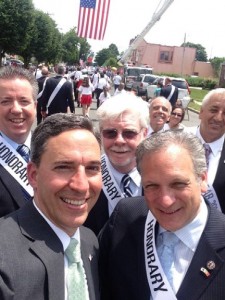 Skelos, Nassau County Executive Ed Mangano, Comptroller George Maragos, Legislative Deputy Presiding Officer Richard Nicolello, New York State Assemblyman Ed Ra , Mineola Mayor Scott Strauss and the Village board. “There were no words to describe it, you had to be there to truly appreciate the nature of the moment and what it meant to the thousands that shared it with us,’ said Long Island Portuguese American Leadership Conference President and 2014 Man of the Year Gabriel Marques. The particulars of the event took over two years to complete, according to Marques, who added that “the leadership that everyone in the community displayed to accomplish this goal will define them as examples for many generations to follow.”

The most emotional party of the parade was when participants turned the final corner onto Westbury Ave, home to Mineola’s “Little Portugal,” where a two-story Portuguese flag was draped from a fully extended fire truck ladder. The large flag even brought many long-time New York residents who emigrated from Portugal to tears, “It was a very emotional moment,” said Parade Director Rosa Leal, President of the Daughters of Portugal. “Some people even started crying,” she said.

More information is available on facebook.com/LIPortuguese