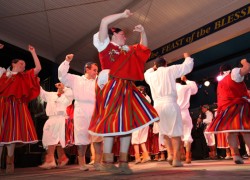 The Portuguese community of New Bedford, Massachusetts, is celebrating the 100th Feast of the Blessed Sacrament to be held July 31 through August 3 in the city’s North Ends area.

The festival opens Thursday, July 31, with the procession and benediction to the Blessed Sacrament taking place at the Our Lady of Immaculate Conception Parish located on the corner of Earle and Madeira Street in New Bedford. The celebrations end on Sunday, July 3, with a commemorative Mass at Our Lady of Immaculate Conception including a special blessing ceremony honoring the festival organizers and the many volunteers involved.

Throughout the weekend, visitors will enjoy Portuguese food and refreshing beverages, live music, dance performances, carnival rides and the city’s largest parade. Most of the entertainment events will take place at Madeira Field, on Madeira Avenue, with additional performances at the Our Lady of Immaculate Conception and the Madeiran Heritage Museum.

Highlights include a dance performance by the Groupo Folclórico Clube Madeirense S.S. Sacramento, fado music , concerts by a variety of bands namely the Gin Blossoms and the Blood, Sweat and Tears rock bands; the Starlight Band (Portuguese Musical group) and country singer Phil Vassar will also perform. Entertainment is free and open to the public.

The Madeiran Heritage Museum, the only one of its kind in America, houses a comprehensive collection of photographs and artifacts that tell the story of Madeiran immigration to the United States.

The Portuguese connection with New Bedford began in the early eighteenth-century with the whaling industry. In the 1860s, the Portuguese in New Bedford, most of them from the Azores, comprised over 60% of whaling crews. From 1870 to 1924, many Portuguese from Madeira and mainland Portugal also migrated to New Bedford to work in textile mills.  Today, about 40 percent of city residents say they are of Portuguese ancestry. Other ethnic groups include the Irish (8.2%), the Cape Verdean (10%), the Hispanic (16%) and the French-Canadian (14%). The population of New Bedford is estimated at 95,072, making the city the 6th largest in the state.

Visit the Feast of the Blessed Sacrament website here.