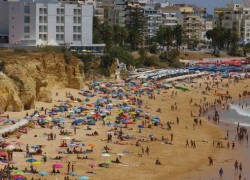 The tourist trick of grabbing the best available sunbathing spots by laying down early morning towels is said to have been pioneered long ago by the Germans, but they have met their match.

The competition used to be fought over poolside sun-loungers and the British learned to become even better at it.

Nowadays the beaches have become hotly contested battlegrounds and the Portuguese have become wily protagonists.

That is certainly the case on the long and lovely beach front by the high-rise resort of Armação de Pêra in the Algarve. 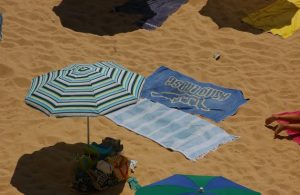 For the second year running, and despite much criticism and ridicule, many towels and sun-umbrellas are in place in prime positions on the otherwise empty Armação sands between 7 a.m. and 8 a.m. each morning. They remain there, deserted, until mid-morning.

The pre-breakfast predators must wake up early or go to bed very late to ensure success.

Armação’s predominately Portuguese population swells from about 5,000 in winter to more than 120,000 in mid-summer. Tower blocks of vacant apartments suddenly become full when the holiday hordes descend from Lisbon and elsewhere in the north.

In August the beach becomes packed from one end to the other. Barely sardine-sized patches of sand are at a premium, especially at high tide.

And never mind the prolonged heat wave, high ultraviolet alerts and the danger of skin cancer. Live for the moment!  Rising sea levels due to global warming may mean that within a few decades there will be no beaches or seaside resorts in southern Portugal at all.

The Brits, the most numerous of the foreign holidaymakers in the Algarve, used to compete with the Germans by laying down early morning towels emblazoned with the word “reserved”

Such Rule Britannia arrogance has been curtailed. Indeed, in Albufeira, just east of Armação, some holidaying Brits seemed uninterested in seeking any sunlight at all.

Having voted to leave the EU did not inhibit a festive “Portugal Invasion” of late-night revellers, some of whom became drunken louts on the rampage and requiring the attention of riot police.

More Brits than usual chose to stay at home this summer, only to be inundated by rain and unusually miserable weather at times across the UK.

Many of those who did come abroad his year have had genuine grounds to grumble about such things as the fall in the value of the pound and the long delays for non-Schengen passport checks.

There are plenty of other moans from visitors every summer, of course.  Before early-morning towels and sun-umbrellas became an issue on Armação beach, one holidaymaker staying in a beach-front hotel had complained about the sound of the waves lapping on the shore. There’s no pleasing everybody.