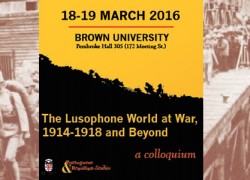 The Department of Portuguese and Brazilian Studies at Brown University is presenting a two-day international colloquium entitled ‘The Lusophone World at War, 1914-1918’ and Beyond,” dedicated to Portugal and the lusophone world experience during World War I.

The event, cosponsored by the Luso American Development Foundation (FLAD), takes place March 18-19, at the Pembroke Hall 3015, 172 Meeting St., Providence RI. The program starts at 9:45am and includes the keynote lecture ‘World War One and the Arts in the Lusophone World’ by Ellen W. Sapega.

Initially, Portugal did not take part in World War I, keeping its neutrality. As tensions between Portugal and Germany arose, following a series of German provocations, there were many hostile engagements between the two countries including the Portuguese colonies in Africa.

As a result, approximately 12,000 Portuguese troops died during the course of World War I, while 3,751 were wounded and 12,318 were made prisoners or went missing, including Africans serving in the Portuguese armed forces. At sea, 96 Portuguese ships are sunken, 5 Portuguese ships were damaged by German submarines.

The Department of Portuguese and Brazilian Studies has an international reputation for excellence in research and teaching on the Portuguese-speaking world — a vast geographical area encompassing eight different countries on four continents (Brazil, Portugal, Angola, Cape Verde, Mozambique, Guinea-Bissau, São Tomé and Príncipe, and East Timor), in addition to long-standing immigrant communities in the United States.

The event is free and open to the public. Find further details here.