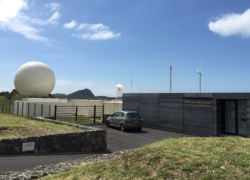 The facility is one of the three fixed structures, with permanent character, part of the international project of the Science Office of the Department of Energy of the United States of America, aiming at the study of relevant parameters for the improvement of climate modeling in different geographic frameworks.

Susete Amaro, took the opportunity to learn about the benefits for the island, namely, through the creation and employment.

The Government of the Azores representative became aware of the enormous potential that the data collected at this station has in the most diverse domains of the Region, such as agriculture, among others.

The Atmospheric Radiation Measurement (ARM) Climate Research Program from the U.S. Department of Energy (DOE ), with 20 years of operations, has been providing data to advance research from atmospheric observations at diverse climatic regimes around the world.