Climate: Destruction of Amazon rainforest must be stopped – by Len Port 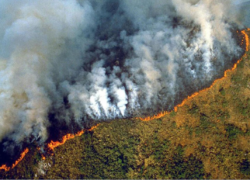 Portugal has had a shared language and close social ties with Brazil since it discovered and started colonizing this huge South American country five centuries ago, but it now finds itself in danger of suffering an environmental catastrophe, partly because of the on-going destruction of the Amazon rainforest more than 4,500 kilometres away.

Since 1970, more than 700,000 square kilometres (270,000 square miles) of the rainforest have been destroyed. That’s about six and a half times the total area of Portugal. The forest desecration is not only endangering Portugal’s well-being but that of the entire planet because of its contribution to climate change.

As the Rainforest Alliance explains, the relationship between deforestation and climate change is simple but highly significant. “Trees capture greenhouse gasses like carbon dioxide, preventing them from accumulating in the atmosphere and warming our planet.

“When we clear forests, we’re not only knocking out our best ally in capturing the staggering amount of greenhouse gasses we humans create (which we do primarily by burning fossil fuels at energy facilities, and of course in cars, planes and trains). We’re also creating emissions by cutting down trees. When trees are felled, they release into the atmosphere all the carbon they’ve been storing. What the deforesters do with the felled trees – either leaving them to rot on the forest floor or burning them – creates further emissions.”

The Amazon rainforest “has reached the point of no return,” wrote an environmental activist in Newsweek magazine. It’s an opinion shared by many others.

According to Bloomberg, the perpetrators of its demise aren’t just government officials doing the bidding of Brazil’s far-right President Jair Bolsonaro or the industrial farmers profiting from tree-cutting. “It’s all about demand, and voracious consumers the world over are also fuelling the frenzy that’s killing the “lungs of the Earth.”

While the Amazon has been a vital carbon store slowing the pace of global warming, researchers say it has suffered losses at an accelerated rate since Jair Bolsanaro took office in January 2019.

“The Brazilian president has encouraged agriculture and mining activities in the world’s largest rainforest,” in the words of the BBC.

The destruction is widely recognized as accounting for 10% to 13% of global CO2 emissions. These emissions are strongly associated with the conversion of the rainforest into cattle ranching and agricultural land. Helped by the rampant deforestation, Brazil is the single biggest exporter of agricultural products to the EU among other places. Many of these products, such as beef, veal, coffee, sugar, soya beans, cereals and rice, are produced on deliberately burnt forest terrain after valuable timber trees are felled and also exported.

If global warming continues as feared, Portugal’s biodiversity will be massively impacted. In Brazil itself, an estimated 100,000 species have been made extinct in recent years and a great many others endangered by the deforestation.

There are about 600 Portuguese companies represented in Brazil. Last year, Portugal imported from its former colony €1.5 billion ($1.7 billion) worth of goods according to the United Nations COMTRADE database on international trade. Much of this was likely to have been produced on deforested land.

on Earth and are fundamental in mitigating the effects of climate change and even reducing those effects.

In July this year it was reported that vast areas of the Amazon are emitting more carbon than they absorb. According to Greenpeace, the burning of the rainforest is now releasing huge amounts of carbon into the atmosphere, and what remains is drying out. This is the tipping point scientists have been warning us about – beyond which the rainforests will no longer be able to sustain themselves and will collapse, say Greenpeace.

The World Wild Life Fund (WWF) explains that the Amazon rainforests have long been recognized as a repository of ecological services for the rest of the world, but are also the only rainforests that we have left in terms of size and diversity.

“As forests burn and global warming worsens, the impact of Amazon deforestation continues to gradually undo the fragile ecological processes that have been refined over millions of years,” says the WWF. The United Nations Cop-26 climate change summit in Glasgow starting 1st November would offer a good opportunity for world leaders to combine and ban importing to their countries any products linked to Amazon deforestation.