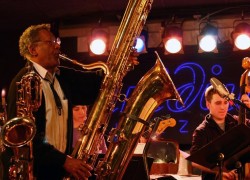 Lisbon based Portuguese record label “Clean Feed” was nominated, for the third year in a row, a finalist for the “The World’s Best Jazz Label” award by New York based Jazz Journalist Association.

Clean Feed, founded in 2001 by Pedro Costa, was originally created to serve the Portuguese jazz scene.  Taking advantage of the Internet revolution its founders expanded it into the global music market to become one of the most prestigious international jazz record labels, with a global distribution reaching as far as Japan, USA, Canada, Germany, France, Norway, UK, Spain, France, Poland, Belgium and Switzerland.

According to the  Jazz Journalist Association the winners will be chosen from a list of about  200 finalist nominees in 39 categories for excellence in music creation and music journalism.

The winners will be announced at the benefit 15th annual   JJA Jazz Awards Gala, taking place in New York City, on June 11, at the City Winery. The Gala, with awards presentations and featured musical performances, will be video streamed live online at jjaJazzAwards.org and simultaneously celebrated with satellite parties thrown by jazz fans and grass roots organizations in cities around the United States and beyond.

The JJA Jazz Awards are the most highly visible jazz honors in the United States for recent work in the international musical scene. The JJA’s Jazz Awards Gala is a fundraiser for the nonprofit  Jazz Journalists Association ongoing operations, which include the training of and advocacy for journalists working in all forms of media.