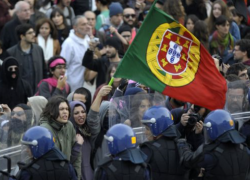 Portugal is facing a wave of civil unrest over the holidays with about 50 strike warnings being issued by workers, most of them civil workers, demanding higher wages and better working conditions.

Protests and strike actions are being organized mostly on social media, outside the control of workers’ unions, which could result in social turmoil inspired on the ‘Yellow Vest’ movement upsetting France in the past weeks.

Travelers could be affected by striking workers at the immigration and border services and airport security guards.

Ongoing striking actions by nurses nationwide have already caused great disruption in the national health system with about 5,000 surgeries postponed or cancelled since November.

Prime Minister António Costa warned that nurses’ strikes are “unacceptable” and that “no one should die because of the health worker’s right to strike.”

Other workers’ actions include stoppages by stevedores at the ports of Lisbon, Leixões, Setúbal, Figueira da Foz, Sines, Caniçal (Madeira), Ponta Delgada and Praia da Vitória (Azores). Road blockades are being organized while supermarket workers are threatening to strike on Christmas Eve.

Most recently Portuguese prison guards walked off their jobs in an ongoing pay dispute with new strikes announced for December and January.

In October, the Trade Union Association of Portuguese Judges staged a 21-day marathon of strikes involving 2,300 judicial magistrates, covering all the courts in the country, and a strike at Portuguese rail ticket offices disrupted rail traffic. Teachers, doctors and museum workers have also staged nationwide striking actions in the past months.

Although the economy has expanded in 2016, 2017 and 2018, workers feel that the economic revival has not been translated in better working conditions and higher salaries.

Prime Minister António Costa has stated that a better economic outcome doesn’t always mean that everything is possible. He said, “We can’t have this illusion that a healthy economy makes everything possible for everyone.”

Portuguese civil workers have had their salaries frozen for the last ten years. Portugal’s minimum wage amounts to €676.67 per month compared to France’s monthly minimum wage at €1,498. To appease workers’ dissatisfaction, Prime Minister Costa has already announced that civil workers will be allowed to take off December 24 and 31, without losing pay.

77shares
Share this ArticleLike this article? Email it to a friend!
Email sent!