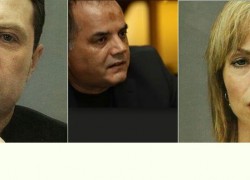 The verdict in Kate and Gerry McCann’s civil action against the former lead detective Gonçalo Amaral may come sooner than expected because of a recent behind-the-scenes development in the long-drawn-out case.

The question of whether or not Kate and Gerry McCann are legally entitled to represent their daughter Madeleine in their claim for damages has taken a significant step closer to being resolved, according to a source close to the process.

Madeleine was made a ward of court in the UK in April 2008. In January last year, Amaral argued in Lisbon’s Palace of Justice that because Madeleine was still a ward of court the McCanns did not have the legal right to represent her in their Lisbon lawsuit against him and three other parties.

The McCanns had a 30-day set period in which to present this. They did so without delay and much earlier than expected. The documentation was presented to the Lisbon court through the couple’s lawyers on 23 January. None of the defense lawyers has or is expected to raise any objections.

So it is now up to the Lisbon judge to decide the relatively straightforward matter of whether the documentation attests to the McCanns’ right to represent Madeleine. When this is settled, the trial is expected to move towards its last formal exchanges and then, finally, sooner than most people had anticipated, perhaps next month, a verdict.

The McCanns are seeking €1.2 million in damages for the severe distress they say has been caused to them by Amaral’s book, A Verdade da Mentira (‘The Truth of the Lie’), and a subsequent documentary.

The judge’s recent summary of the main points in the case that had been proved or not proved left Amaral and his supporters optimistic about the eventual outcome.

Amaral said this week that he was hoping for an acquittal and the lifting of financial difficulties that have burdened him since the McCanns decided to sue five years ago.