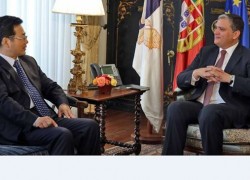 The Ambassador of China in Portugal, Huang Songfu, met with the President Vasco Cordeiro, in Ponta Delgada, Saturday, to address issues of mutual interest to China and the Azores.

After the meeting, President Vasco Cordeiro, the head of the Regional Government of the Azores, told reporters that the hearing “was very helpful”  remarking that issues relating to scientific partnerships with the University of the Azores and the possibility to export dairy products to the Chinese market were the main topics addressed.

“China is one of the major world consumers of dairy products,” President Vasco Cordeiro said, adding that the Azores being a major producer “there is great potential to export such products to China.”

Vasco Cordeiro also remarked that he was very pleased that the Chinese market is now open to include the Azores as a tourism destination.