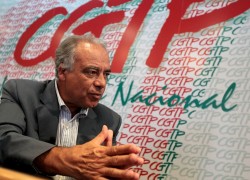 The leader of CGTP, Carvalho da Silva, announced Monday that workers nationwide will hold a week of protests scheduled for December 12-17. CGTP is the country’s largest trade union federation representing 727,000 workers in 81 unions.

Speaking at a press conference, Silva said demonstrations are being called to protest against changes in the labor law approved in parliament which add a 30-minute extension to the normal working day for the private sector.

Speaking of the general strike held on November 24, Silva said, “This is still about continuing the objectives set by the general strike.” He also said that CGTP will support all possible forms of protest by workers against what he called “the abusive imposition of longer working hours.”

The November 24 strike was one of the largest strikes ever staged in Portugal. Hundreds of thousands of workers held demonstrations in all 20 district capitals and towns nationwide.

Last May, Portugal agreed on a 78bilion-euro ($104 USD billion) emergency bailout loan with the European Union, and the International Monetary Fund.

Parliament will vote this week on a deficit reduction plan as a result of the agreed international bailout.

Further installments of the emergency loans could be withheld if Lisbon does not meet targets for deficit reduction.