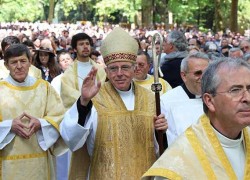 In a document released by the Cardinal of Lisbon, D. Manuel Clemente, the Catholic Church in Portugal is demanding that Catholic divorced and remarried couples abstain from sexual relations or be denied Confession and Holy Communion.

According to the issued rules; couples “in an irregular situation” should lead a “life of abstinence” to access the sacraments.

He argues that each case should be specifically evaluated. If the first marriage is not annulled and the validity of the previous marriage is confirmed, the remarried couple must lead a “life of abstinence.”

For some couples the doors will stay open through participation in prayer groups. Ultimately it will be up to the couple to take the decision before God.

More progressive religious leaders consider that the Cardinal shows little knowledge about the reality of marriage. They have criticized that to require married couples to abstain from sexual intercourse is “inhuman” and “impossible” to fulfill.

According to a study published in 2014, by European Statistics, in Portugal of every 100 marriages, 70 end in divorce, one of the highest rates in the European Union. In Portugal, the Azores have the highest national divorce rate, with 2.6 divorces per thousand inhabitants.

Starting in 2015, the Portuguese Catholic Church has made marriage annulments available, at no cost, thanks to changes brought in by Pope Francis. Marriage annulment was a process that could take up to five years and cost €1,500. Annulments are now offered in cases where marriages have broken over infidelity, dependence on drugs, alcohol addiction or gambling.