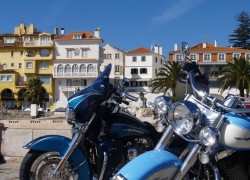 The town of Cascais, nearby Estoril, will host the 21th European H.O.G. Rally, scheduled for June 14-17. About 10,000 Harley Davidson bikers are expected to participate.

According to organizers, the event will include a Custom Bike Show taking place in nearby Estoril home to Europe’s biggest   casino. Participants will have a chance to win prizes, including a trip to Sturgis for the Best Modified Harley.

An annual Harley Davidson June event has been a Portuguese tradition since 2000 representing the largest Harley Davidsons in Portugal gathering more than 150 aficionados from across the country.

Harley-Davidson   established the Harley Owners Group (abbreviated H.O.G.) in 1983 in response to a growing desire by a new breed of Harley riders for an organized way to share their passion and show their pride.

In 1991, H.O.G. went international, with the first official European H.O.G. Rally in Cheltenham, England. Today, more than one million members and more than 1400 chapters worldwide make H.O.G. the largest factory-sponsored motorcycle organization in the world. Harley-Davidson sustains a worldwide loyal brand community which keeps active through clubs, events, and a museum.