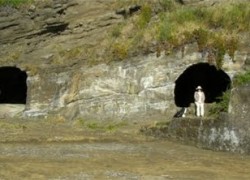 Archaeologists from the Portuguese Association of Archeological Research (APIA) believe to have found in the Azores a significant number of Carthaginian temples, from the fourth century BC, dedicated to the goddess Tanit.

According to APIA’s  archaeologists, Nuno Ribeiro and Anabela Joaquinito, “More than five hypogea type monuments (tombs excavated in rocks) and at least three ‘sanctuaries’ proto-historic, carved into the rock, were found.”

A monument located at “Monte do Facho” shows inbuilt sink shaped carvings linked to water conduits for libations. “There are ‘chairs’ carved into the rock, a ceremonial tank covered by vegetation, and dozens of post holes indicating the existence of a shelter over the area,” they said.

The APIA’s researchers said, “The temples carved inside the hypogea structures are large and very well preserved and were drawn almost in a triangular shape.”

They said, “In the first temple there are four sinks linked to conduits to collect fresh water associated with ritual libations, probably for sacrifices purposes.”

The second and third shrines are located in the area of the Forte de São Diogo, Terceira island, and were discovered in late June.

Recently, traces of Sunni inscriptions were discovered on São Miguel and Terceira islands, by APIA’s archeologist Nuno Ribeiro. Previously, a number of Carthaginian and Greek coins were found on the island of Corvo and dozens of pre-Christian hypogea were uncovered on the islands of Terceira and Corvo. Similar findings were also reported on the islands of Santa Maria and Flores.

Based on their findings, researchers now believe it is possible to establish that human presence in the Azores precedes the Portuguese occupation of the islands in the fifteen century.